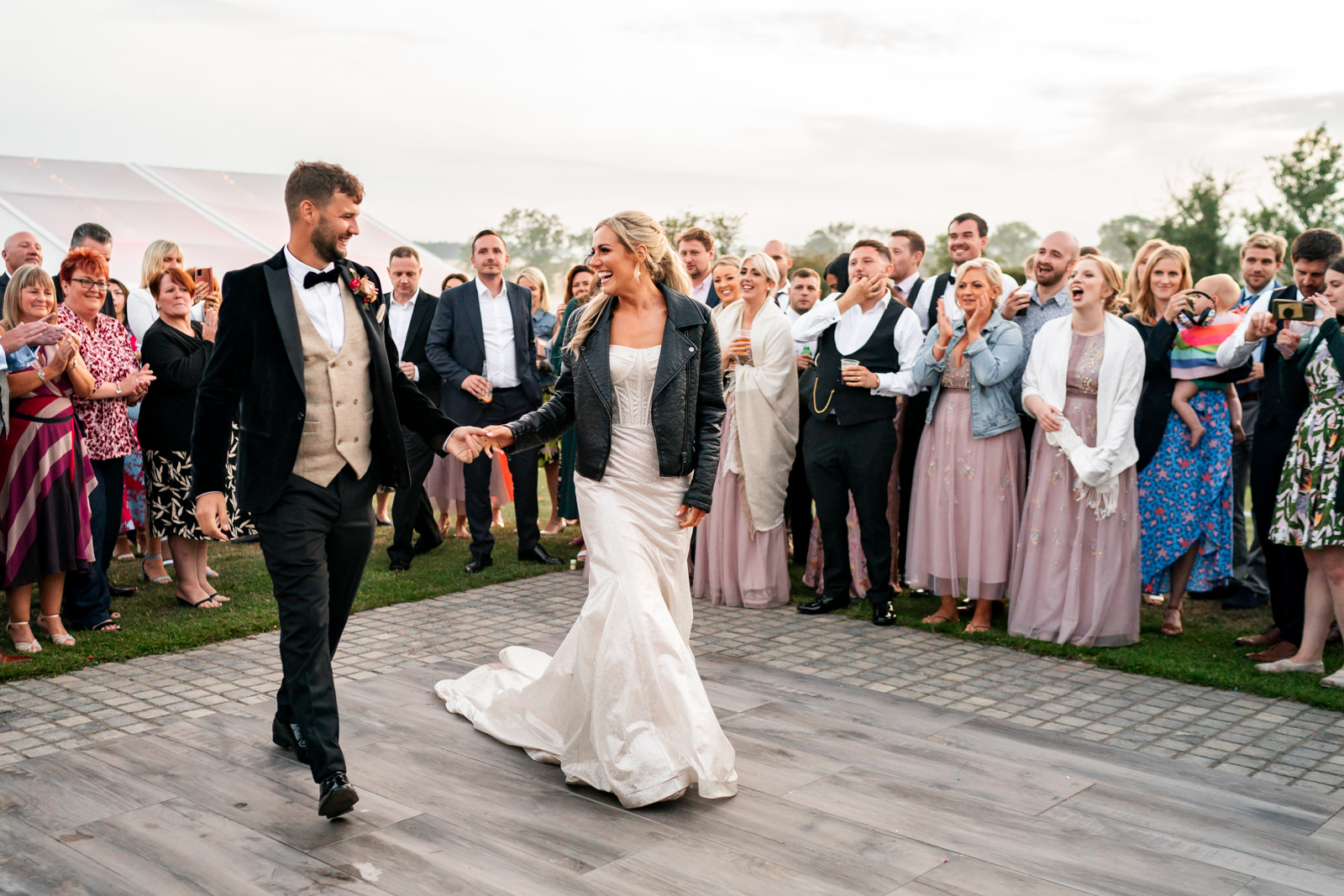 Have fun, be bold, be totally yourselves and above all PARTY HARD! A unique and colourful wedding captured by North East wedding photographer, Phil Salisbury.

I joined The Marshalls, Sam and Jack, as their North East wedding photographer, at a place very close to their hearts. They’d set up a brilliant, colourful wedding with family festival vibes at Sam’s parents holiday home co-ordinated by the legendary Emma Jordan. Although it’s not actually an official wedding venue, it was the perfect place for Sam and Jack to celebrate their marriage with their families. I’m based in Manchester, but travel all over the UK and abroad to capture weddings, and this one had it all - Countryside views, a lake, beautiful buildings, plenty of space for a marquee, and also not too far from the beach… what else could you need?!

The day started with bridal prep, laughing and sipping fizz as Carolyn Watson makeup and Josephine Birkett MUA got everyone looking and feeling glamorous. Sam is one of the most loving, bubbly, fun, energetic, charismatic, outgoing, personable and loving brides I have ever met, she’s incredible. The energy levels were brilliant all day, and her laughter is infectious (there were definitely several collapsing in giggles moments from all of us!).

Sam had put so many thoughtful touches into making the day special for everyone else too, including some beautifully written messages to her family, and a dedication to her late grandmother in the form of a framed photo that would be tied into her bouquet. These emotional moments between them are some of the most important things for me to capture as a documentary wedding photographer, telling the story of Sam and Jack’s wedding day.

The boys went for a run on the beach together in the morning before having a bit of gourmet breakfast, cooked up by one of the groomsmen who could give Gordon Ramsey a run for his money! Eventually getting into their suits from Abigail’s Collection – The Groom’s Room, in Colchester.

The lads weren’t quite as organised as the girls, who had one of Sam’s infamous to-do lists to work through, and keep everything in order. So much so that the bridesmaids took a quick break from getting glammed up to switch into legend mode, and got all the chairs set up for the ceremony (whilst still in their PJs!), when it became clear the fellas were running late!

As everyone got dressed, the finishing touches were being added to the marquee. Amazing florist, Karon from Meadows and Mulberry, was busy creating the beautiful displays of flowers over the archway that would frame Sam and Jack’s wedding ceremony by the lake. Wedding Coordinator Emma Johnson was also making sure everything was running on schedule, turning Sam and Jack’s vision into a reality at their unique North East wedding – even the neighbouring cows were interested in what was going on!

So much of Sam’s focus so far had been on enjoying the moment, and she had made the day so special for everyone else. When she finally got into her stunning, sparkly Abella Bride wedding dress from Abigail’s Collection it instantly became real, and the girls all celebrated by cranking up the music and drinking fizz direct from the bottle! Meanwhile the boys downed their beers and headed to the lake for the main event!

As the guests took their seats (thanks again to the Bridesmaids for making sure the seats were actually there!), Jack nervously waited for Sam to walk down the aisle on her Dad’s arm. The couple had been legally married prior to the day, so their emotional ceremony was carried out by two of their friends, making it super personal to them. They also wrote their own vows, filling every word with meaning about their life so far, and their future together.

The couple have an amazing group of friends and family, and the smiles and happy tears that surrounded them were a really wonderful thing to capture as their North East wedding photographer. Their parents’ support and emotion was particularly moving, as they proudly watched Sam and Jack tie the knot.

After the ceremony, Sam and Jack were showered with brightly coloured confetti from every angle, even the dogs joined in! Their fur babies, of course had to be included in some of their group portraits too, which I arranged in front of the lake with the floral archway behind them.

I worked quickly to capture group photos, as I wanted to make sure the important family photos were covered early, so everyone could relax and get on with partying!

Their wedding reception continued with a family festival vibe, and everyone playing giant Jenga, connect4, and games of flippy cup. Shirley the unicorn joined the party, and was a big feature from hereon in! When I’m capturing award-winning wedding photography, I’m always on the lookout for people reacting to what’s happening, and there was plenty to document at this North east wedding reception!

The marquee had been decorated beautifully, the tables were packed with more flowers from Meadows and Mulberry, red and gold place cards, gold cutlery, and pops of pink in the glassware. Hiring in these bits and pieces from companies like Whitehouse Events and Crosby Hire creates some gorgeous added luxury detail for me to capture as your North East wedding photographer.

As the wedding breakfast got under way, there were some… let’s say… more… adult games being played, with a hilarious rude twist on the traditional ring toss game being brought from Sam’s hen-do, in the form of ‘dick head’.

A delicious feast was provided by Jacob and Tori Caterers, with all the drinks they could need from Premier Bar Hire, to get everyone merry and prepare them for the party! There were lots of gifts given during the speeches, including costumes, a framed football shirt, and even a mini-Shirley the unicorn!

After the speeches (including, of course, an amazing one from Sam), Sam put on her personalised leather jacket and they set about a very competitive game of flippy cup! I love capturing both the close-up shots of people’s expressions and details, as well as wider photos of the whole scene like this one, there are so many things happening in one photograph!

There was a bit of drama when a window of one of the outbuildings shattered suddenly, with absolutely no reason for it! Cue lots of people moving kit, sweeping glass, and relocating the fun (and our camera equipment) elsewhere!

I escaped with Sam and Jack for a walk along the beach together, capturing some moments that are just SO them. Including wandering barefoot along the sand, dipping their toes in the sea, and laughing together as they took in the views and sea breeze before heading back to the party.

When we got back to the marquee, fog was beginning to settle on the horizon, and the lights around the lake were glowing at dusk. It was just so stunning, so we suggested maybe they could have their first dance outside, which was really unique and atmospheric.

Then I guess the rest is party history! Their rocking wedding band, The Re-Issues got everyone dancing, jumping around, head banging and playing air guitar. Everyone, and I mean EVERYONE, ended up on the dancefloor. Shirley the unicorn made another appearance and Sam was carried round above everyone’s heads on her magical inflatable friend!

Thank you, Sam and Jack!

Sam and Jack, what can I say, what an amazing couple. They did their wedding day their way, with everything totally tailored to what they wanted. Putting fun, family, and celebration at the centre of the day, and abandoning anything traditional that didn’t seem like their jam. As their North East wedding photographer, I felt like part of the family, and was given a lesson in partying Sam and Jack style – I loved every minute!

If anyone else out there is looking for a North East wedding photographer, get in touch, I would love to hear from you – I doubt there will ever be another wedding like this one, but there’s definitely a party around every corner, and I can’t wait to join you!

Check my availabilityRequest a brochure